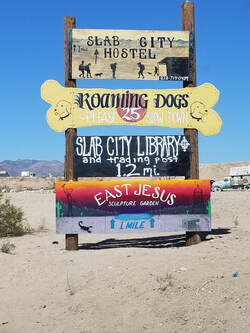 Words can not describe you must visit Salvation Mountain and Slab City seeing is believing. Salvation Mountain is Leonard knight's tribute to god. Slab City is on and old Navy Base that was deactivated after world war II and is now a community of people living off the grid. East Jesus is a sculpture garden like you have never seen before.
Salvation Mountain must be seen to be fully appreciated as those who have made the journey will attest. Its 50 foot height and 150 foot breadth is made totally of local adobe clay and donated paint and is truly unique in the United States and probably the world. From its Sea of Galilee at the bottom, to the big red heart in the middle, to the cross at the very top, the reoccurring theme of "Love" is everywhere at Salvation Mountain.

Slab City has been referred to as “the last free place on earth” and an “anarchist RV town” and was recently featured in the non-fiction book and film, Into the Wild. During the winter months, as many as several thousand campers – mostly elderly retirees – flock to the site for the warmer desert weather and lack of fees. These seasonal residents, known as “snow-birds,” live in a variety of housing formats. Though most come to the area in their RVs, many also squat in abandoned structures, such as old, inoperative buses or driftwood shacks. A small population of people also lives there year-round, braving the harsh summer months when temperatures can reach above 120 degrees Fahrenheit.

Come on let's go call today and make a reservation for a tour you will never forget.